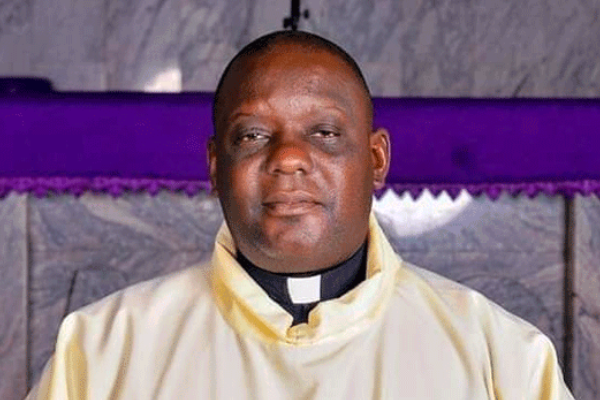 Another Catholic priest, Rev. Fr. Vitus Borogo, 50, was murdered by terrorists in Kaduna State while they invaded the Kujama prison farm on the Kaduna-Kachia route last Saturday, June 25.

Yesterday, the Catholic community released a statement in which it expressed sorrow and mourning over the priest's death.

In a statement sent to ACI Africa on June 26, the Rev. Fr. Emmanuel stated the details about where he was killed and shared the condolences of Archbishop Matthew Man-Oso Ndagoso, the Local Ordinary of the Nigerian Metropolitan See.

It is with a heavy heart, but with total submission to the will of God, that we announce the death of Fr. Borogo, which sad event took place on Sunday (yesterday) at the Prison Farm, Kujama, along Kaduna-Kachia Road, after a raid on the farm by terrorists.

Rev. Fr. Emmanuel said that until his death, Rev. Fr. Borogo was Chaplain of the Catholic Community at Kaduna State Polytechnic and Chairman of the Nigerian Catholic Diocesan Priests Association (NCDPA), Kaduna chapter.

The Nigerian Catholic Priest says that details about Fr. Borogo's funeral will be made public "as soon as possible." Rev. Fr. Emmanuel implores,

Details of his funeral arrangement will be announced soon. Meanwhile, we commit his soul to the maternal intercession of the Blessed Virgin Mary, and call on all men and women of goodwill to continue to pray for the peaceful repose of his soul and for the consolation of his bereaved family, especially his mother.

A day after gunmen killed Fr. Borogo, another Catholic priest had been murdered.

Fr. Christopher Odia, 41, was kidnapped early on Sunday, June 26, as he was leaving his parish home to attend Holy Mass, and he was then assassinated.

The Social Communications Director of the Auchi Diocese informs ACI Africa “with heavy hearts but with total submission to the will of God" about Fr. Odia's murder.

According to Fr. Peter Egielewa's statement from June 26, his coworker "was killed by his abductors after being kidnapped this morning 26th June 2022 at about 6:30am in his rectory while coming out to go for Sunday Mass at St. Michael Catholic Church Ikabigbo, Uzairue, Edo State."

"Until his death, Fr. Odia was the Administrator of St. Michael Catholic Church, Ikabigbo and also the Principal of St. Philip Catholic Secondary School Jattu. He was aged 41. May his soul rest in peace," Fr. Egielewa says in his statement to ACI Africa.

The arrangements for Fr. Odia's funeral and burial “will be announced by the Diocese later,” says the Director of Social Communications for Auchi Diocese.

In April, BBC News said that the West African nation of Nigeria “is grappling with a wave of violence by armed gangs who frequently carry out killings and kidnappings for ransom – mostly in unprotected rural communities.”

Nigeria hasn't been safe since 2009, when the Boko Haram insurgency began with the goal of turning the country into an Islamic state.

Boko Haram is one of the largest Islamist groups in Africa. It has been planning and carrying out terrorist attacks on civilians, religious and political groups, and other groups without discrimination.

Fulani herdsmen, who are mostly Muslim and sometimes called the Fulani Militia, have been fighting with Christian farmers, which has made the situation even more dangerous.

Fr. Borogo's death is the latest in a string of killings of Christians and people in the clergy in Africa's most populous country.

On June 19, gunmen attacked worshipers at St. Moses Rubu church, one of the 17 outstations of St. Augustine's Parish of Kaduna Archdiocese, Maranatha Baptist, and Evangelical Church Winning All, all of which are in Kajuru Local Government Area (LGA) of Kaduna State.

“We lost three of our parishioners, and 36 people were kidnapped, the majority of whom were Catholics,” Fr. Francis Agba, the Parish Priest of St. Augustine's Parish, told CNA, a sister agency of ACI Africa.

Fr. Agba also said, “This is the third attack against this village in this month alone and the latest of 15 attacks in the 17 outstations of the parish this year.”

Despite the existence of military camps and security structures, gunman attacks persist in Kaduna State. These gunmen, who are frequently referred to as bandits in Nigerian media, have targeted tourists, rural populations, and educational institutions.

The perpetrators' actions have resulted in millions of people being kidnapped, killed, injured, or relocated.

In several areas of the unrest-ridden southern section of the state, robbers have recently attacked Christian communities.